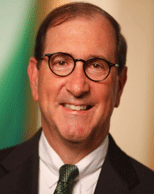 "Innovation in Medtech: Bedside to Bench to Bedside"

MEDx will be welcoming William A. Hawkins III, E'76 for the MEDx Annual Distinguished Lecture Series. This event, taking place at the Trent Semans Center for Health Education in the Great Hall, is open to the Duke community and a reception will follow. The lecture is from 4-5pm on Monday, October 02, 2017.

Mr. Hawkins is the Former  Chairman and CEO of Medtronic and is currently advising Private Equity and Venture Capital groups as well as serving on multiple for-profit and non-profit boards. He was recently elected to the National Academy of Engineering and is an AIMBE Fellow.

Mr. Hawkins received his bachelor's degree in electrical and biomedical engineering from Duke in 1976, where he also conducted medical research in pathology. He then went on to earn an M.B.A. from the Darden School of Business, University of Virginia, in 1982.

Mr. Hawkins is a Senior Advisor to EW Healthcare Partners. He serves as a Director of Halyard Health NYSE:HYH and Chairman of the Board of KeraNetics and of Bioventus. He is Lead Director at Immucor and serves on the Board of Trice Medical, Virtue Labs and Baebies. Mr. Hawkins is the Past Chairman and co-Founder of the Medical Device Innovation Consortium ("MDIC"), and past-president of the American In