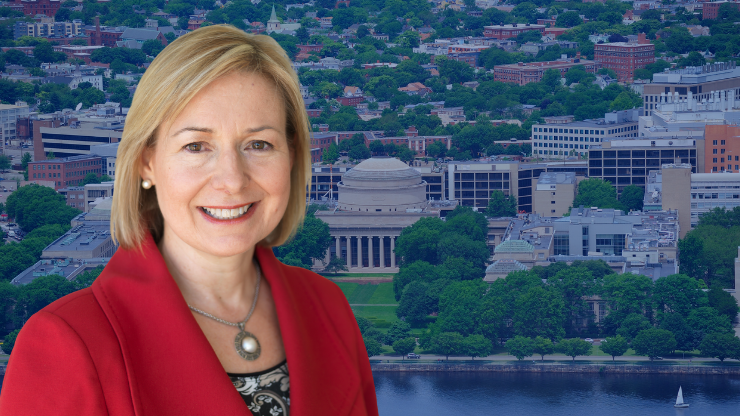 Most people check tomorrow’s weather forecast before going to bed. But what if you could also check your personalized mood forecast and see you have a 40% chance of higher stress tomorrow?

That’s one idea Rosalind Picard, Sc.D., FIEEE, left viewers with during her talk, “How Can Wearable Technologies Advance Our Understanding of the Brain, Stress and Health?” at the fifth annual MEDx Distinguished Lecture on October 19.

Picard gave a tour of her scientific journey of taking relatively simple nervous system signals and translating them into meaningful and impactful health predictors. She closed with a look towards the not-so-distant future of wearable technologies and painted a picture of personalized mood forecasts that provide tips on how people could improve their forecast. 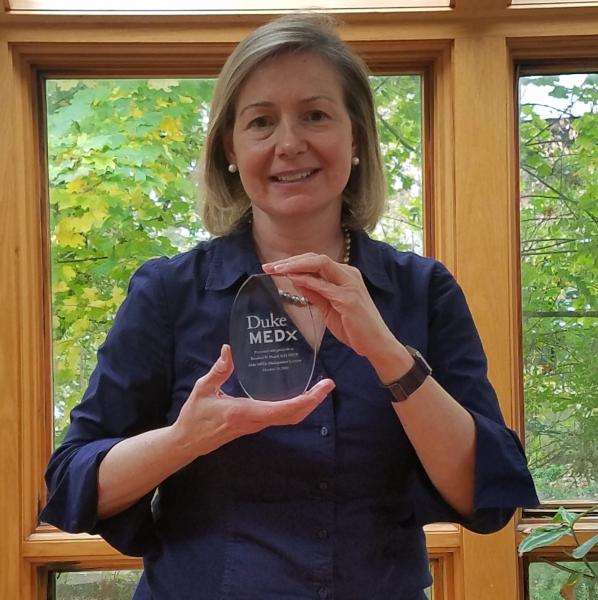 Picard is credited with starting the branch of computer science known as “affective computing,” with her book by the same name. She continued this research by pursuing questions and problems in neuroscience, including developing computational tools and devices to help humans — particularly people with autism spectrum disorder — recognize nuances in human emotions. One of her startups, Empatica, Inc., developed the only FDA-approved wearable device to detect epileptic seizures and alert caregivers. These are only two of the many accomplishments that made Picard an obvious choice for the MEDx Distinguished Lecturer award, which honors icons in the fields of medicine and engineering who have had a positive impact on human health.

In addition to her lecture, Picard had several meetings with members of the Duke community as part of the Distinguished Lecture series.

Picard first met with several Duke leaders, including Dean Klotman, Provost Kornbluth, Geoff Ginsburg, Ken Gall, Dean Bellamkonda and Donna Crenshaw. The group shared ideas, including ways to support entrepreneurship on campus. Above all, Picard emphasized the importance of enhancing innovation between medicine and engineering and pointed out Duke’s unique position to do so because both programs are onsite, unlike at MIT and many other institutions, and because of groups like MEDx.

Picard, along with several Duke women faculty, also participated in a Women in Science meeting hosted by MEDx. They engaged in open and thoughtful conversation about what it means to be a successful woman in science and how to create communication across disciplines.

They shared many insights, including best practices for women when picking a mentor, choosing collaborators, building trust networks and improving publication presence. “It’s important to ask around about potential collaborators,” said Picard. “Find out if they’ve worked with other women and if they’re fair in assigning credit. And don’t be afraid to reach out beyond your home institution for input.”

Picard also shared an important piece of advice with the women: “Don’t undervalue passion. It’s not just intellect that will get you to the next step in your career.” She emphasized the importance of diversifying your portfolio and not being afraid to pursue some crazy ideas — even if they crash and burn. “You do need to have constrained optimism to have success in your career, but with high risk comes high reward.”

To close out her virtual visit, Picard met with trainees from across Duke’s campus. Students working and/or interested in the intersection of engineering, technology and medicine were invited to come and pick Picard’s brain. She spent time answering wide-ranging questions — from career advice to what-ifs about wearable technologies. “When it comes to overcoming barriers while working in clinics, or at any point in your professional career,” said Picard, “you have to take risks. Don’t let your fear get in the way of learning.”

When the pandemic subsides, MEDx will host Picard for an in-person celebration of her achievements. Maybe by then, we’ll all be able to review our personalized mood forecasts.

Picard is a professor of Media Arts and Sciences at MIT, founder and director of the Affective Computing Research Group at the MIT Media Lab, and co-founder of the startups Affectiva and Empatica. In 2005, she was named a Fellow of the Institute of Electrical and Electronics Engineers for contributions to image and video analysis and affective computing. In 2019 she received one of the highest professional honors accorded an engineer, election to the National Academy of Engineering for her contributions on affective computing and wearable computing.

If you would like to nominate someone for next year’s Distinguished Lecturer award, contact us at dukemedx@duke.edu.