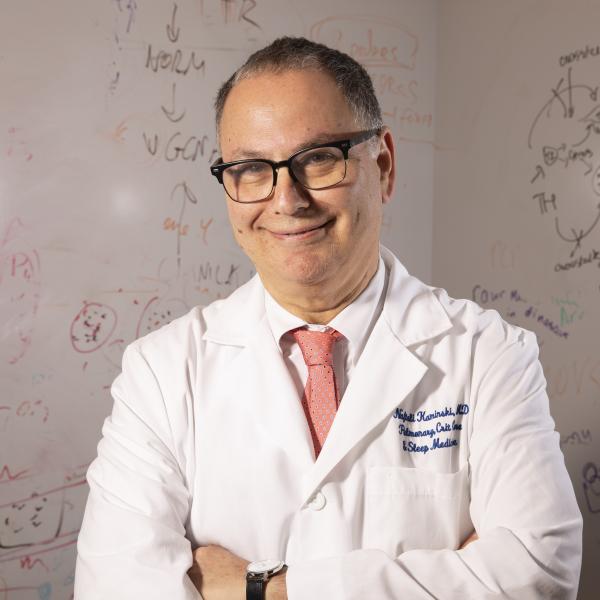 Dr. Kaminski, Boehringer-Ingelheim Endowed Professor of Internal Medicine and Chief of Pulmonary, Critical Care and Sleep Medicine, at Yale School of Medicine, is an internationally renowned expert in genomics of Pulmonary Fibrosis and other advanced chronic lung disease, biomarkers discovery and molecular mechanisms of Pulmonary Fibrosis. Before joining Yale, Kaminski was a tenured professor of Medicine, Pathology, Computational Biology and Human Genetics, and the founding director of the Dorothy P. and Richard P. Simmons Center for Interstitial Lung Disease in the University of Pittsburgh. Dr Kaminski received his medical degree from the Hebrew University - Hadassah Medical School in Jerusalem, Israel, and completed a residency in Internal Medicine at Hadassah Mount-Scopus University Hospital in Jerusalem, and a fellowship in pulmonary medicine at Sheba Medical Center in Tel-Hashomer, Israel.

Dr. Kaminski pioneered the application of high throughput profiling technologies and systems biology approaches to human lung diseases, and among his key discoveries are the identification and validation of outcome predictive peripheral blood biomarkers in IPF, the discovery of the role of matrix metalloproteinases and of microRNAs (let-7,mir-29) in human pulmonary fibrosis as well as other molecular mechanisms with therapeutic implications in IPF. Most recently his group identified a potential role for thyroid hormone mimetics in improving mitochondrial function in pulmonary fibrosis, established the case for a clinical trial in saracatinib in IPF and profiled 350,000 cells from 80 lungs of patients with IPF, COPD or controls to create the Human IPF Cell Atlas. Dr. Kaminski has authored more than 275 research papers (including in Nature Medicine, NEJM, Nature Genetics, PNAS, Science Translational Medicine, Science Advances, Lancet Resp Medicine, American Journal of Respiratory and Critical Care Medicine), review articles and book chapters and has given numerous invited talks at national, international conferences, and NIH workshops. Dr. Kaminski has been consistently funded by NIH since 2003 and is currently PI of multiple NIH grants. Dr. Kaminski’s awards include the Coalition for Pulmonary Fibrosis Marvin I. Schwarz Award for Pulmonary Fibrosis, the University of Pittsburgh Innovator Award, the American Thoracic Society Recognition of Scientific Achievements award, the Helmholtz Institute International Fellow Award, the European Respiratory Society Gold Medal for Interstitial Lung Disease, the Andy Tager Excellence in Mentoring Award and the Blavatnik Fund for Innovation at Yale Award. Among his recent national roles, Kaminski was the Chair of the American Thoracic Society Assembly of respiratory Cell and molecular biology, the President of the Association of Pulmonary, Critical Care, and Sleep Medicine Division Directors and Deputy Editor of Throax BMJ.

Dr. Carla Kim is a Professor of Genetics at Boston Children's Hospital and Harvard Medical School. Dr. Kim has a Ph.D. in Genetics from the University of Wisconsin—Madison and performed postdoctoral research at the MIT Center for Cancer Research. Dr. Kim pioneered the use of stem cell biology approaches for the study of adult lung progenitor cells and lung cancer. The Kim Lab developed an organoid co-culture technique that can be used to study the interactions of lung progenitors, endothelial cells and mesenchymal cells. These advances provide new ways to uncover mechanisms of lung disease and possible new therapeutic approaches.

Barker is a Professor in the departments of Biomedical Engineering and Cell Biology at the University of Virginia and the Director of the UVA Fibrosis Initiative. Dr. Barker’s research activities center cell-extracellular matrix biology, mechanobiology, and biotechnology focused primarily on fibroblast-ECM interactions that drive tissue repair, regeneration, and fibrosis. His research integrates engineering applications and basic cell and molecular biology approaches to understand and control cell phenotype through cell engineering/synthetic biology and ECM engineering.

Cardoso is the Director of the Columbia Center for Human Development, as well a professor of both medicine and genetics. His research focuses on the mechanisms that regulate lung development and regeneration-repair of the lung. For nearly two decades his laboratory has been making relevant contributions to the field, providing insights into how developmental signals, such as retinoic acid, Fgf, Tgf beta and Notch control lung progenitor cell development, airway branching and epithelial differentiation. These studies have also contributed to the understanding of mechanisms controlling lung regeneration-repair and of the impact of prenatal fetal exposures in the adult lung function and susceptibility to disease.

Fine is a practicing Pulmonologist, bench researcher and bioethicist. For the past 30 years, he has led an NIH funded research program that examines basic biological questions regarding how the lung grows, develops and responds to injury.

Hagood is a pediatric pulmonologist specialzing in rare lung disease. His “Lung Repair Lab” studies the molecular regulation of fibroblast phenoty[es in pulmonary fibrotic disease and lung alveolarization. He also studies the roles of regulation of Thy-1, a critical modulator of cellular phenotype, and epigenetic/epigenomic alterations in lung development and disease, as well as targeted therapy for diffuse lung diseases.

Desai is a pulmonary physician-scientist who studies the basic biology of lung alveolar development, maintenance and repair. He investigates how proliferation and differentiation of the alveolar epithelial type II (AT2) stem cell is regulated and how these stem cells can participate in diseases like lung adenocarcinoma and IPF. Dr. Desai is also interested in harnessing the regenerative capacity of lung stem cells for the treatment of diseases like cystic fibrosis and IPF.

Petersen is Vice President of Regenerative Medicine and United Therapeutics in Research Triangle Park, N.C. As part of his graduate and postdoctoral work, he developed the first transplantable and functional engineered lung, and the results of this innovative work were published in Science. His work was recognized by TIME magazine as one of the best inventions of 2019 and by CNN as a Top Innovation of 2010. Currently, his team is developing cell- and tissue-based therapies for lung diseases with a particular focus on pulmonary hypertension and bronchopulmonary dysplasia.