One man's journey to bridge the gap between medicine and engineering

The medical field is filled with devices. Even at a simple checkup, a health care professional will interact with thermometers, stethoscopes, blood pressure cuffs and more. Every medical discipline has its own set of specialized medical devices to help diagnose and treat diseases. It’s not uncommon for medical professionals to wish these devices had additional functionality or features, but the conversation often stops there. 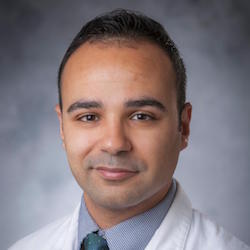 Enter Muath Bishawi, M.D. After receiving his medical degree from Stony Brook, Bishawi came to Duke for his residency. He’s specializing in cardiac surgery and has been interested in medical devices for years. “Some devices are pretty good, and a lot aren’t great,” he said. “Everything can be improved on.”

That desire to improve devices and patient care drew Bishawi to take a break from his medical residency to pursue a Ph.D. in engineering.

In his first engineering class, he came up with an idea for a new kind of catheter based on his experience as a second-year surgical resident during a rotation at the VA Medical Center.

A patient with metastatic cancer had a complication with his gall bladder, and due to other health issues, his team of doctors decided he was too high risk for surgery to remove it, so they decided to use a catheter to drain the excess fluid instead. The patient was eager for the procedure; his goal was to be at home living out his remaining time with his wife. However, he experienced blockage problems with his catheter and ended up in the ER every couple of weeks to get the blockages fixed. “I remember thinking ‘This is crazy,’” Bishawi said. “How do we not have a catheter that works better and gets obstructed less?”

During his engineering class, he started planning and designing a more functional catheter. After the class ended, he wanted to continue pursuing his idea. With the help of Joe Knight, adjunct professor of engineering and Ken Gall, associate director of MEDx, Bishawi started Lacuna Medical and is hoping to target the FDA by early 2019 for clearance. “Before taking this project on, I thought the hardest part would be coming up with an idea, but that’s the easiest part,” Bishawi said. “The hard part is taking an idea from the back of a napkin all the way to a product that a patient will benefit from.”

He’s working with his five-person co-founding team and a contract manufacturer that includes three engineers and builders and assemblers to create a 3D ShapeAssist catheter that is more resistant to failure. It coils around itself several times, which protects the proximal holes of the catheter. The design resists drifting when it’s in place, and resists clogging by external structures, which makes it fail far fewer times than a normal catheter.

“Some of the best devices I have worked with have been ones where clinicians and engineers have worked together,” Bishawi said. But to be able to do that, the two parties have to be able to speak the same language. “Medicine and engineering are like two huge mountains of information,” Bishawi said. “I want to sit in the valley between them and communicate with both sides very freely.”

MEDx is helping him navigate that valley. He has been able to connect with other like-minded individuals in both engineering and medicine and learn about a variety of funding opportunities. He’s an active member in InnovateMD, a program MEDx supports that provides medical and surgical trainees and faculty with an educational and experience-based opportunity to collaborate with engineering students and faculty in medicine device innovation. He is also a member of the Medicine and Engineering Interest Group (MEIG) that works to stimulate interest and collaboration in medical design and technology among students in the School of Medicine and biomedical engineering programs.  As part of his Ph.D., Muath has also helped TA some of the medical design courses for the Pratt students.

“I’ll always want to operate and treat patients,” Bishawi said, “but having a better understanding of the engineering behind some of these devices and a better engineering background will allow me to not only interact with these devices better, but it will also give me the opportunity to work directly with the engineers and device manufacturers to improve them.”