MEDx: Where we started and future opportunities (A reflection from Geoff Ginsburg) 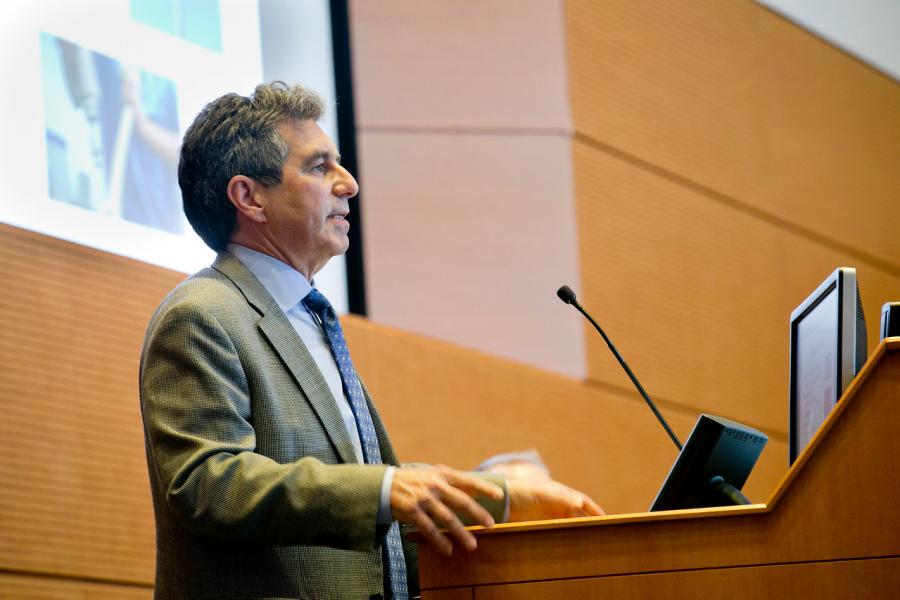 MEDx (Medicine + Engineering at Duke) was forged in 2015 to enhance existing ties and foster new interdisciplinary collaborations between the Duke School of Medicine and the Pratt School of Engineering. Geoff Ginsburg, MD, PhD, professor of medicine, pathology, biostatistics and bioinformatics, and nursing, was appointed as the founding director of MEDx.

Fast forward to 2021, Ginsburg recently announced that he will be stepping down as director of MEDx in January 2022 to pursue a new and exciting opportunity with the National Institutes of Health (NIH) as the Chief Medical and Scientific Officer for the All of Us research program.

We asked Ginsburg to look back over the years and reflect on the creation of MEDx, accomplishments, its people, growth and more.

Even before MEDx was born, Ginsburg said, he had always had the concept of collaboration in the front of his mind. Maybe it was in part due to being the first occupant in the Fitzpatrick Center for Interdisciplinary Engineering, Medicine, and Applied Sciences, which was dedicated, thanks to the Fitzpatrick family, to bringing engineers, clinicians, and biomedical researchers under one roof for interdisciplinary work.

For example, Ginsburg recalls one of his engineer colleagues, Lawrence Carin, PhD, walking into his office one day to pitch the idea that they work together on a proposal involving detection of infections before they become symptomatic. This led to an expansive program to use genomic technology to detect infection – an example of the kind of natural collaborations Ginsburg had always sought and an inspiration for the creation of MEDx.

To encourage the formation of opportunities at the intersection of academic units, the former dean of the Duke School of Medicine, Nancy Andrews, issued a call to develop interdisciplinary programs and funded colloquia to allow faculty members to explore ideas. One such colloquium, instigated by Ginsburg, revealed solid support across the disciplines for funding a greater number and more diverse collaborations between medicine and engineering. Both schools, Medicine and Engineering, were extremely encouraged by the initial level of engagement, and Andrews and the former Dean of the Pratt School of Engineering, Tom Katsouleas, could see the potential for building upon the groundbreaking work already occuring through collaborations between Duke engineers and clinicians by putting a focused strategy in place.

The ideas that eventually led to the creation of MEDx were formulated over a series of dinners coordinated by Ginsburg. Early input came from senior investigators, like George Truskey, PhD, a biomedical engineer, and research administrators, like Sally Kornbluth, PhD, who at the time was the Vice Dean of Research for the Duke School of Medicine. Eventually, more than 30 faculty members would brainstorm over dinners at Mateos, a local tapas restaurant.

Ginsburg recalls, “You couldn’t even get around the table to hear from everyone. That is how many good ideas were coming out of these discussions. I quickly learned that the secret sauce to collaboration is food and money.” These dinners were followed by a Town Hall to gain input from the larger engineering and medicine communities.

“I remember that dinner well. Dean Andrews had released funds for new interdisciplinary endeavors with some hope that they might blossom into something larger,” added Provost Kornbluth. “MEDx has more than fulfilled those aspirations. The excitement and energy of the group was palpable from that first meeting and has only grown over time as MEDx has become an important convener and catalyst for interactions between Medicine and Engineering.”

MEDx, as envisioned in those meetings, emerged with support from Deans Andrews and Katsouleas and the newly appointed Provost Kornbluth. Dean Andrews added additional fuel with funding that allowed MEDx to invest in the recruitment of scientists and engineers, the MEDx Investigators, who were applying engineering solutions to biomedical and clinical problems and held joint appointments in the schools of Medicine and Engineering. 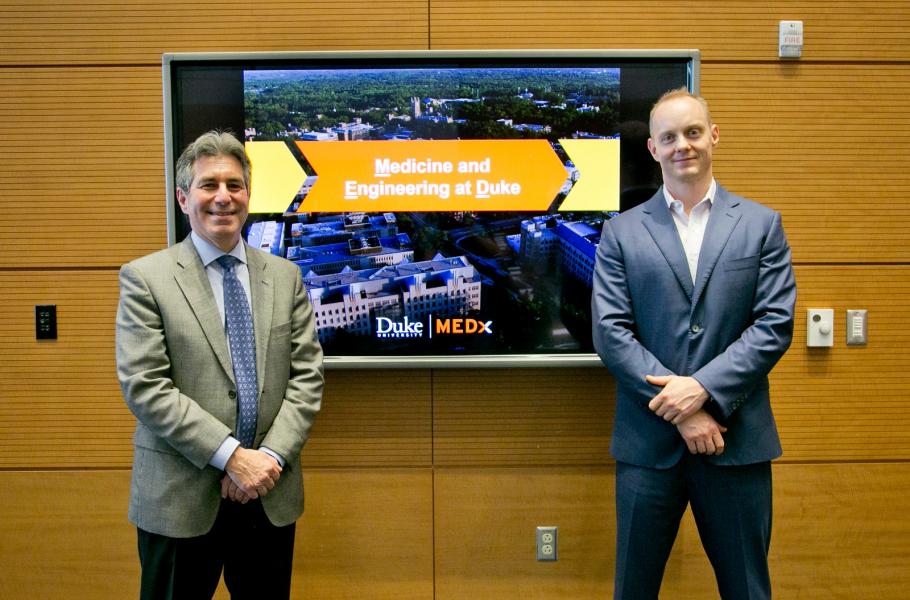 Ken Gall, PhD, then professor and chairman in the Department of Mechanical Engineering and Materials Science, was named the associate director of MEDx in 2015. Gall brought not only deeper connections to the School of Engineering but also experience with translating medical devices to commercial realization.

“When Geoff offered me the position of associate director of this newly formed initiative [MEDx], I jumped at the opportunity. Bringing together Medicine and Engineering with a strategic focus to amplify earlier successes is increasing the number and diversity of collaborations and projects.” said Gall. “It’s been exciting to watch innovation flourish out of the grassroots initiative of MEDx.”

Shortly after, Ginsburg and Gall named Donna Crenshaw, PhD, MHA, the executive director of MEDx. Crenshaw has overseen the MEDx strategy, operations, and programs since 2015 and will be continuing as the interim director starting in January 2022. Crenshaw’s wealth of experience with facilitating collaborations among researchers, clinicians, and engineers has been integral to the success of MEDx.

“Donna is one of the main reasons MEDx has moved the needle with these collaborations. Her ability to shift between multiple disciplines has kept MEDx agile and has prepared the initiative to continue this agility for future success. Donna has brought this MEDx team to the level we had hoped for,” says Ginsburg.

While research that included physicians, engineers, data scientists, and biomedical researchers was occurring naturally before MEDx, Ginsburg saw the opportunity to bring these ideas and collaborations to the next level by having a defined initiative, dedicated funding, and a strategy for scaling. Ginsburg’s vision was for MEDx to identify or seed ideas and pave the way for them to forge ahead. His concept of MEDx acting as an “arch” helped to meet ideas where they were – if they were undeveloped, MEDx provided a platform for new collaborations; if they were in development, MEDx assisted with getting additional funding; and if they were mature ideas, MEDx connected the dots for commercialization. By creating connections and opportunities through colloquia and pilot funding, MEDx has supported projects that are competitive for follow-on funding and translation to new companies and commercial opportunities.

“Of all of Geoff’s fine qualities, two that I most admire are his abiding commitment to innovate and improve health and his ability to find coalitions of people with different perspectives and from different disciplines to achieve great things,” says Crenshaw. “These characteristics, in the context of the proximity of two great schools and the inspiration of the successful collaborations that had already occurred, allowed Geoff to envision the great opportunity that Duke has to increase the pipeline of healthcare innovations.” 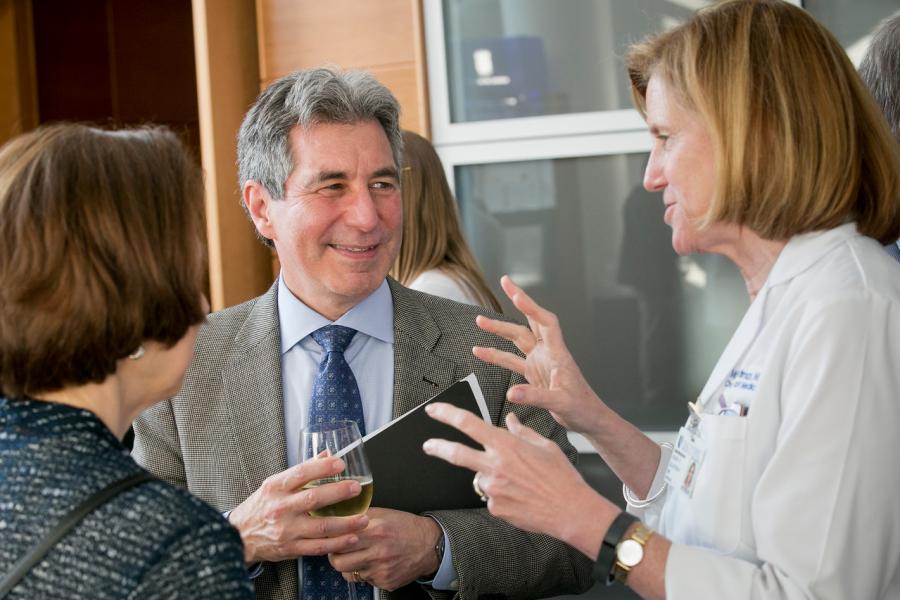 MEDx continues to grow, and now administers other programs that are dedicated to interdisciplinary training and research that engages clinicians, biomedical scientists and engineers. A gift bestowed on Duke by a former Duke medical student to honor his mentors from medicine and engineering, Drs. Spach and Barr, endows a scholarship that provides tuition support for medical students and residents to pursue a master’s degree in engineering and supports seed grants for high risk, interdisciplinary projects. The scholarship is developing clinicians who want to combine their clinical insights with engineering acumen to improve patient care.

The Kaganov Research Initiative in Pulmonary Medicine and Engineering also reflects the MEDx approach, to encourage discourse across disciplines and provide seed funding for novel research. This initiative was founded by a gift from Alan and Carol Kaganov who recognized the need for new perspectives to advance basic understanding, diagnostics and treatments for pulmonary diseases. Mary Klotman, who succeeded Nancy Andrews as Dean of Medicine, and Ravi Bellamkonda, who succeeded Tom Katsouleas as the Dean of the Pratt School of Engineering, continue to be supporters of MEDx and proponents of the value of combining engineering with biomedical science, entrusted the management of this initiative to MEDx.

Ginsburg’s vision for MEDx sees it, or initiatives modeled after it, expanding beyond Medicine and Engineering to engage more researchers from other disciplines from across the Duke campus who are engineering new methods and technologies that will improve human health. “MEDx is unique in the sense that it is a virtual initiative, even before we all went virtual with the pandemic,” says Ginsburg, “This has helped the initiative stay nimble and is an extremely cost-effective way to catalyze collaborations across campus and even beyond Duke.”

“Our engineering and medicine faculty together are well positioned to develop the tools, devices and models that can address biological, clinical and data science challenges and unmet needs across the human lifespan to improve health and to enable precision medicine to become a reality at Duke and beyond.”  - Written by Geoff Ginsburg in original MEDx proposal

The future is bright for MEDx, and for Ginsburg, who starts his new position with the NIH All of Us research program in January 2022, bringing with him important experience and lessons learned from MEDx. He intends to instill the theme of collaboration amongst the many entities of the All of Us research program and its global research community. By promoting and enabling interdisciplinary interactions, providing motivation, and helping people along the way, he expects to achieve the successes that MEDx has promoted.